Bigfoot is not an important thing to most people. It’s entertainment – a tantalizing possibility to tease curiosity and fuel ‘B’ movies, YouTube and reality TV. How would life change if indisputable proof were produced?

If you knew for sure there was something ‘out there’, faster, sneakier and smarter than you, able to take your head off with an audible pop – you might avoid the forest…right? But you probably do already. So, what else? What difference would it make?

If you know the truth about Bigfoot, it puts a new perspective on human arrogance. To realize, right next to seven billion of us there are who-knows-how-many thousands of eight-foot, hairy, bipedal hominids who are so good at playing hide-and-seek that we lost track of their existence. One might wonder if we are the dumber ape.

We weren’t always clueless. And some people never have been. Traditional First Nation people have always accepted it’s existence. Only in the last century has there been a concerted denial by skeptics.

Skeptics are bred in cities for the most part…need I say more?

The Bigfoot community likes to blame scientists, and we should. They hold themselves as the arbiters of truth when they are as clueless as anyone… they don’t even go look. They’ve erected a wall of ostracism to climb over for anyone who hints of Bigfoot’s plausibility. Cheers to the hand-full of brave scientists who’ve had the courage to investigate the subject.

In spite of a mountain of evidence and eyewitness accounts, the argument is that none of it is conclusive. And thanks to hoaxers, who should be burned at the stake (I don’t care how funny it is, it’s dishonest) there is an easy excuse for any single piece of evidence.

Perhaps it’s better this way. It will be terrible if biologists run around bagging DNA samples, tranquilizing and tagging the creatures, probing and categorizing them like they do everything else. I don’t want Bigfoot sporting ear tags and GPS transponders. I don’t want our behavior to affect theirs.

I pity the great whales being harassed endlessly by dart guns and tags, speedboats and self righteous environmental protectionistas. It may have the optics of being well-intentioned, but it doesn’t amount to much more than papers written by academics to justify their existence. The world rolls on; whale, elephant and tiger populations rise and fall, but generally fall, largely under the heavy hand of humans in spite of those efforts.

I fear armies of undisciplined, city-bred college students tramping through the mountains measuring the angle of tree leans. What would be the plus side – sales of pith helmets would skyrocket? The hairy folks in the forest seem to be doing fine without our help now.

It would also be terrible to see huge swaths of forest lands isolated from our enjoyment. You must know, ultimately it would happen to ‘protect the species’ – mankind can’t resist the urge to meddle. It might also mean protecting us the same way it’s done for bear and mountain lion – with a gun.

Certainly there are people in the Forest Service who know of them, and may have come to this conclusion: leave things as they are. It may be a sad day when ‘Science’ finds Bigfoot.

Nevertheless, truth is the most important thing for some of us. Ignorance isn’t bliss, because it doesn’t satisfy the need to know. Fortunately, there is a way to know, for yourself, the truth about Bigfoot. Forget those who snicker and deny its existence. It would diminish their self importance if they knew what lurks behind the backyard fence.

The purpose of this post is to introduce Gila Bigfoot, a ‘YouTube’ playlist devoted to searching for Bigfoot. I just needed to rant for a minute.

Credit is due to Utah Sasquatch for conceiving of #projectgoandsee which, along with many other people participating in the project, inspired the production of ‘Gila Bigfoot’, .

Reo is a hero, which rhymes nicely, but is a worthy tribute, because he shows anyone interested in how to find Bigfoot, how to actually do it. He makes the challenge to all of us very simple and straight (why is it someone even has to say this?): Go Look!

#projectgoandsee and its many contributors are simply walking into the woods to see for themselves. Possibly the best contributor is ‘Colorado Bigfoot‘, who’s YouTube videos of complex, massive, and absolutely un-hoaxable tree structures provide conclusive evidence of, at least, a coherent entity behind their making. What he films in the forests of Colorado begs an explanation.

Arizona isn’t the first place people think of when Bigfoot is the subject. This is one paradigm people should get over. They are not isolated to the Pacific North-West; the Cascades, the Rockies, or this, or that…they are closer than you think.

Arizona is a patchwork of desert and mountain, but south of Four Corners, along the eastern border of the state, there is a hopscotch of mountains all the way to Mexico.

Bigfoot reports are concentrated in four, high country, forested areas. Area 1, on the map, is the Kiabab Plateau, which includes Mt. Humphreys and the Grand Canyon, particularly the isolated, barely inhabited North Rim.

Area 2 is the Navajo Nation, which includes the San Juan Basin, and the Carrizo and Chuska Mountains, where sighting aren’t discussed much with outsiders.

Area 3 is the best known area in Arizona. It’s home of the Mogollon Monster. Sighting reports are numerous along the rim, all the way to the Continental Divide. Here is a good video featuring the late Mitch Waite, Arizona’s original Bigfoot Hunter. 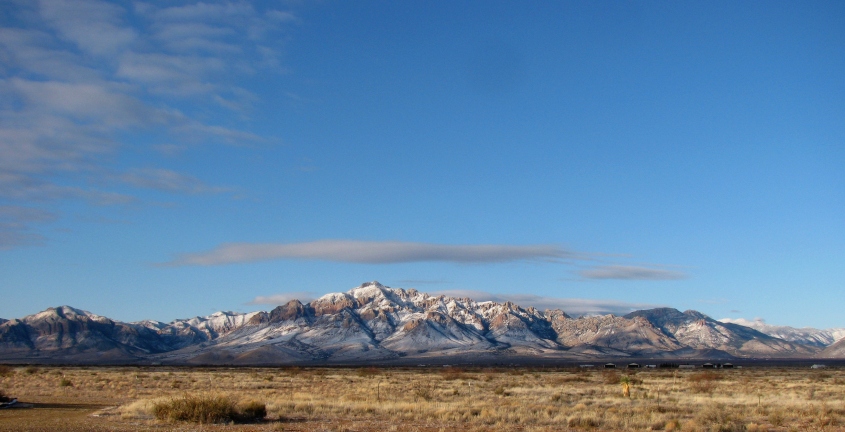 The term “Sky Island‘ pertains to the mountains in the basin and range country of Southeastern Arizona and well into Sonora Mexico. The ranges are surrounded by basins of arid desert. Like islands on the sea, forest habitat is isolated above seven thousand feet. Yet there is ample territory to support a profusion of wildlife. These mountains boast more diversity of species than Yellowstone.

I use these feature to advantage. Trail finding is easy in the area I survey. Obvious paths marked by tree leans, tree breaks and barriers cross the minimal network of roads on the mountain in several places.

The mountains are rocky, mostly steep ground a sane person wouldn’t venture through without a trail. Every canyon, meadow and waterway is brooded over by rocky caps on the peaks, where a single lookout can see all approaches.

My technique is simple. I go light and alone except for my dog. I hike straight up a path of tree leans, quickly and quietly. I choose trails that lead a short distance to a ridge, or peak, where there is likely to be evidence of their presence. There is also the possibility of an encounter.

I don’t try to hide, my footsteps will give me away anyway. I simply move quickly, under the assumption it will take them a few minutes to realize I’m off the human trail and coming their way. I hope they hesitate to move away before I get close enough.

I don’t whoop, or call blast, or beat on trees, or perform any other stunt to “draw them in”. The only thing that would accomplish is chase them away, or bring them into my campsite at night, which is the last thing I want.

I’ve been rewarded about thirty percent of the time with a whoop, rock clacking or, in one case, a horrible smell. The whoops and rock clacks were authentic. There is no animal that could do either and I’m certain no humans were around. The smell – well, it wasn’t me. That is enough, along with marveling at their ingenuity with trees, to make the effort worthwhile. They work trees like we do flower arrangements.

Of course I want to see one. That’s the ultimate goal. But I don’t expect that to happen and be able to film it. Besides, I’ve crossed that Rubicon. I saw one in California several years ago. It screamed at me. It wasn’t a pleasant experience.

I wasn’t looking for one then. Now that I am, will it scare the hell out of me again? Probably…but then, that is the adventure. I hope you enjoy these first episodes of Gila Bigfoot.

Join 585 other followers
Follow The Daily Plasma on WordPress.com