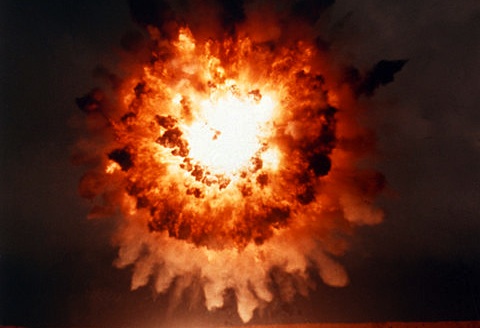 Electric Universe theory has long argued that large meteors striking Earth is a rare thing. It’s not that rocks don’t fall to Earth, it’s just that something has to happen first. That something is electrical discharge.

Because the electrical charge of a body in space is not the same as Earth’s, something has to give when they come together. Electrical potential has to equalize. That occurs when the meteor makes electrical contact with Earth, not when it actually impacts.

Craters everywhere; the Moon, Mar’s, Mercury and beyond, as well as other-otherworldly terrain features, display the earmarks of electrical discharge more predominately than impacts. In fact, EU theory suggests the asteroids and comets themselves are a result of electrical discharge between planets. They are debris from discharges that made the craters – not the cause of the craters.

The larger the meteor’s mass, the larger the potential difference will be. Electrical discharge is likely to blow a big meteor to pieces further from Earth than a small one. Damage is caused by the shock wave from the meteor, not the left-over pieces of meteor impacting Earth.

That is the case with the two largest meteor events in modern history: Tunguska and Chelyabinsk. Chelyabinsk exploded in an air-burst, as witnessed by thousands of people. It’s long been suspected Tunguska did too, since no pieces of meteor were found. By all evidence, Tunguska appears to have been a shock wave from an exploding air-burst meteor entering the atmosphere at supersonic speeds.

Since the Chelyabinsk event was witnessed and filmed by so many, there is evidence of how the air-burst occurred, and how it is predicted by Arc Blast theory.

Arc Blast proposes certain geologic features are the result of shock waves created by supersonic winds. It is predicated on the fact shock waves are conduits of electric current. A shock wave suddenly spikes the density, pressure and temperature of the medium it travels in. It also spikes ionization, creating a charged wave-front of voltage higher than the surroundings.

The charged shock-wave is what causes the meteor to explode in mid-air, as this slow-motion film has captured. First, look at these still frames to see what’s happening.

So what happened here?

That column of condensation was the shock wave – the bow shock ahead of the meteor, making contact with the ground and reflecting to form a standing, reflected wave.

This film of the Chelyabinsk meteor is visual evidence of Electric Universe theories. The dynamics of comets and meteors bear this out in every other respect, as well. Look deep into the Tunguska mystery, and the evidence and eye-witness accounts support a shock wave/electrical discharge event.

The same can be said of the Shoemaker-Levy 9 comet that struck Jupiter. The explosions occurred in Jupiter’s ionosphere due to electrical discharge. So concludes Wal Thornhill who discusses the many points of evidence in the linked video. He describes how the comet fragments glowed bright as they approached the planet, how the planet’s polar aurora brightened when the comet made contact, how radio emissions were received from Jupiter during the event, and he provides visual evidence and an explanation how and why the explosions occurred in the ionosphere due to electrical discharge.

As quackademia’s grip on the theory of uniform evolution is eroded by overwhelming evidence of catastrophic upheaval in Earth’s past, it’s become fashionable for roguish scientists to look at meteors as a cause. Data from geologic strata, ice cores, sea level and fossil remains tell of periods when extreme environmental conditions prevailed. There is evidence of floods, winds, earthquakes and volcanoes – huge compared to anything in modern times.

That the demise of Cretaceous dinosaurs is attributed to the Chicxulub meteor is accepted wisdom, simply because there is a hole in the ocean floor. As ‘Climate Science’ is recognized a failure, and geologists find more holes in the ground, I fear scientists will stop attempting to correlate every climate hiccup in the record with carbon emissions, and begin to correlate with the holes in the ground.

But it’s a bit too convenient to jump to the conclusion meteors cause every catastrophic event. There is physics to consider, and physics says two sufficiently large and differently charged bodies are going to discharge when they make electrical contact, not when they impact. How discharge occurs is an arc blast through the standing waves made by the bow shock reflecting from Earth. You just saw visual proof, unless there is a better interpretation.

The physical consequences are different. Kinetic impact will have different secondary consequences than an electric shock-wave impact. Knowing this doesn’t mean a big meteor won’t destroy a city, or a hemisphere one day. Death by electric shock-wave is still death. But it may clue us how to protect ourselves. It may be easier to survive than what is believed an impact will do.

It also may clue us how to protect Earth from a large meteor in the first place. Give it something to discharge to – before it reaches Earth. Place a minefield of asteroids in it’s path – pre-loaded with ionic charge and long wire antennas to ensure contact.

The Chelyabinsk film follows, with special thanks to Don Kress for providing it.