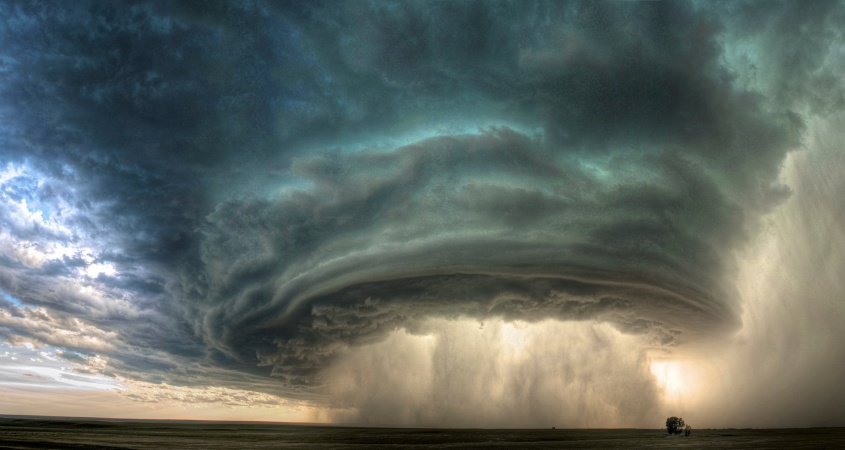 The Electric Winds of Jupiter

Jupiter is our largest neighbor and generates the largest electromagnetic field in the Solar System except for the Sun. It has a thick, turbulent atmosphere, with swirling storms producing winds of supersonic speed, and lightning arcs that dwarf the puny sparks we have on Earth. So right off the bat, we see attributes of electrical processes like the processes we are exploring in Earth’s primordial past.

Nothing exemplifies the electrical nature of Jupiter more than its bands of counter-flowing winds, and the giant swirl known as The Great Red Spot.

Electric winds occur when an electric field potential exists that motivates ionic species in the air to move. Positive ionic species are drawn in one direction, and negative ions and free electrons are drawn in the opposite direction, as dictated by the polarity of the electric field. The ions may be only a small percentage of the bulk mass of air, but electrically they form a current – moving charge – that will drag neutral molecules with it.

The result of these opposing motions are uni-polar winds. A positive wind from one direction, and a negative wind from the other, attracted to, or pushed away from the “electrodes” in the circuit.

If the wind occurs in atmosphere surrounding a planet, the winds will circumnavigate the globe in alternating bands in a direction transverse to the magnetic polarity of the planet. This is the effect on display in Jupiter’s atmosphere, as well as other planets in our Solar system with strong electric fields.

The “electrodes” are nodal regions where current flows through the planet’s atmospheric sheath and crust. That is why they appear at certain latitudes. At these “electrodes”, uni-polar winds mix in whirlwinds. The mixing of ions results in a plasma, where, with much condensation, violent arcing and swirling, they electrically adhere to form molecular bonds and precipitate. This is what we know as a storm.

The primary electrodes in a planetary circuit are around the magnetic poles, and the evidence of the electric field strength is in the glow-mode currents called aurora.

Another type of “electrode” is an accumulation of charge density from volcanic eruption, where discharges internal to the crust expel huge volumes of charged pyroclastic dust 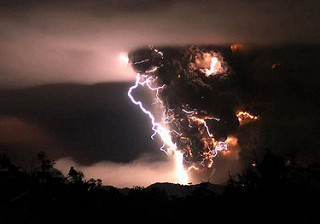 into the atmosphere, and spread hot magma across the land.

Another “electrode” is where the planet’s electromagnetic field produces regions of high flux from comic rays, driven by stellar winds (or perhaps some other motivating force). Charged particles spiral down magnetic lines of flux and charge the crustal surface, creating electrode spots. 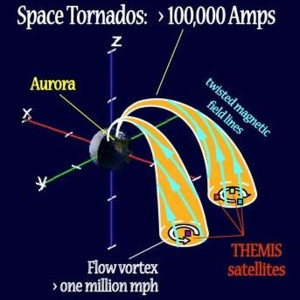 In every case, discharge follows the geometry of a plasmoid Earth, where the “Blue Marble” we live on is just a bubble, or drop of matter encapsulated in an electric circuit. The plasmoid circuit is what matters – what controls everything – and it flows through the atmosphere and crust to create the capacitance that motivates weather, earthquakes and volcanoes.

Uni-polar winds are drawn to the electrode spots, like water flows to an open drain. Only a solid crustal surface provides no hole to sink into. The winds are constrained by the vacuum of space above and the solid crust (or ocean) below. They circulate in induced vortex currents to mix in a plasma storm, recombining charged species into neutral matter that rains to the surface. 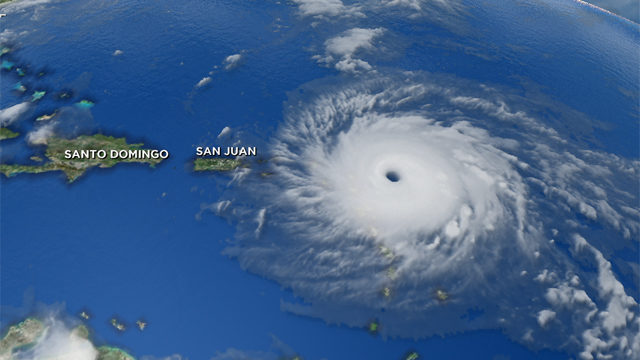 Storms are evidence of currents induced by capacitance in the layers of atmosphere and crust of the planet. It does not matter if it is Earth, Jupiter, or an exo-planet yet to be discovered. A planet with an active electromagnetic field will form a spherical layer of capacitance in it’s atmosphere and crust, through which loops of magnetic flux will induce ring currents to flow transversely through the layers.

A ring current is the simplest form of circuit. In Nature, where there are no insulated wires to guide current flow, ring currents form naturally. Unlike a Berkeland current in space, where current flows from one body to another along the electric field between them, a ring current simply circulates on itself.

Ring currents rule the universe – not gravity. It’s because magnetic fields are closed fields – they form closed loops between poles, and magnetic flux induces current to flow along these loops – the induced current follows to form ring currents. Nature can’t stop itself forming ring currents. They exist at the atomic level, the molecular level, the planetary level, the stellar level and the galactic level of our cosmos.

Because Earth’s ring currents have no end, they are infinitely long conductors that induce current from the Solar Wind. Because they are infinitely long, there is no limit to the current they can induce. The currents form a winding, that, like a transformer inside the Earth, raises potential in the circuit. The result is an internal electric field in opposition to the ambient electric field of the Solar System.

Earth’s crust and atmosphere is the ‘almost’ neutral boundary – the dielectric plates between the internal and external fields that seek a charge balance.

Any change in the external electric field causes a response internally, because the internal electric field acts like a mirror, reflecting a feedback response. The mirroring effect is caused by capacitance, because if charge builds on one plate of a capacitor, the other plate responds by building an equal and opposite charge. So change takes place both internally and externally, and the neutral balance between – where we live – is disrupted, until the internal and external fields come back to equilibrium.

Of course, there is never an equilibrium. Because Earth is a sphere, each capacitor plate of the sphere has a bigger area, as a function of radius, so there can never be two layers with equal charge density across equal areas. Layers of earth and atmosphere are always building charge and discharging. It is physically impossible not to.

This is the wisdom of the ancients, which today we confuse with mysticism: “As above, so below” has a simple, classical scientific meaning. It refers to the capacitance in Earth’s circuit and the feedback (or reflection) inside the Earth caused by whatever is going on in the Solar System.

To see this in action, one need only look at the extremely intense current loops that form on the Sun. These are called coronal loops, and are produced by the same kind of capacitance in the circuitry that causes weather on Jupiter and Earth. The difference isn’t in the circuitry, the difference is the plasma state the atmospheres are in. The Sun is almost completely ionized, whereas Earth and Jupiter have partial plasma atmospheres. The ionized atmosphere of the sun produces ray-gun like currents, whereas partial plasma atmospheres like Earth and Jupiter produce more diffuse hydrodynamic currents we see as wind and clouds.

The rings are currents of excess charge the Solar circuit is shedding. As in the sun, the interior Earth layers have less area, so as charge accumulates by induction, it develops greater charge density in the ground and must shed current outward, through the atmosphere.

In a storm on Earth, the ambient electric field reverses, from a 200 kV “clear weather” current flowing outward, to a 500 MV current aimed at the ground. The Earth beneath a storm becomes positive to a negative sky, as accumulated charge finds a path to discharge.

Ring currents also produce a magnetic field inside them that is stronger than the magnetic field outside. Basically, it’s because the geometry of a ring causes magnetic flux to disperse in a greater area outside of the ring than inside. Therefore, there is a stronger magnetic flux inside the loop that induces a secondary current flow, perpendicular to the coronal loop. Current flows through the atmosphere and crust both in the vertical columns of the loops and horizontally in current induced by the loops. These currents travel through layers of atmosphere and Earth’s crust.

Another property of ring currents is very strange and counter-intuitive. When we look at a ring current generated in a looped wire with a battery – generating, say, one amp, any two points in the loop will measure a current of one amp. But if we generate the same amount of current in the wire by induction, by passing a magnet through the ring, the current at any two points may be different, even though the sum of all current in the wire still adds to one amp. The induced current may be different where the wire’s contact with the magnetic field is weaker, but elsewhere in the ring the magnetic field will be diametrically stronger and generate current that makes up the difference.

The result is that current density may form in one part of the ring and not in another, or one part of the ring may even flow backwards – a current of opposite polarity. Coronal loops on the sun display this. NASA imagery shows plasma bolides shooting through rings at varying speeds, and sometimes reversing direction.

On Earth, current rings formed by the geomagnetic field also display this inductive behavior, developing a severe storm at one leg while doing nothing at the other. It also allows direct current inputs from induction to become alternating currents, as currents in a ring will oscillate as charge stores and discharges in the capacitance of the system.

Coronal loops generate winds as ionic matter follows electric fields, dragging bulk air mass with it. Ultimately, the winds form jet-streams that must thread in three dimensions through the inflow/outflow, updraft/downdraft regions formed by coronal loops, like rope wound into a knot.

If one also includes spherical geometry, as in the capacitance of planetary circuits, then it becomes simple deduction that the geometry results in higher charge concentration inside Earth than outside and will produce these kind of waves. It cannot “physics-wise” be otherwise. So waves like this form naturally, consistently and unavoidably. And that results in ring currents – coronal loops, magnetic field lines inducing current – call it what you like. It’s electric.

In Part 3 we’ll see how ring currents produce storms on Jupiter and Earth, and how they progress in fractal elements from a common thunderstorm to The Great Red Spot on Jupiter.