Re-posted courtesy of Thunderbolts.info. Unless otherwise captioned, all images courtesy of NASA, JPL and ESA.

Science has puzzled over the moon more than any other body in space. It’s the only place mankind has walked, and brought back a ton of rocks, so we know a lot about it. Yet, some of it’s features puzzle science as much today, as the day they discovered it wasn’t made of cheese.

The biggest question is, why are the near and far-sides so different.

The moon is tidally locked to Earth, so presents one side to Earth at all times. The near-side is dominated by the smooth, dark maria that appear to be the result of enormous impacts that left seas of magma. The far side, however, has little maria, and is pockmarked with many more craters. 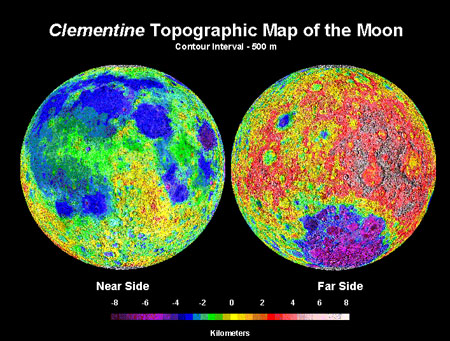 The near-side crust is only 60 km thick, overlain with 3 to 5 km of regolith – the pulverized concrete-like dust and rock of the lunar topsoil.

The far-side is much thicker; so much so, it is believed to be the cause of a significant offset to the Moon’s center of mass.

The far-side crust is 100 km thick, covered in 10 to 15 km of regolith, and so extensively carpeted with craters they often overlap. 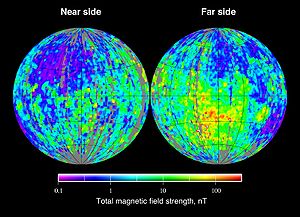 Also of note, the moon exhibits remanent magnetism that portrays the exact same pattern of antipodal contrast from the near, to far-side. The areas of highest contrast in crustal thickness and magnetism are skewed far to the north on the near-side, and far to the south on the far-side. They directly oppose each other.

Standard theory has changed over the years attempting to explain the moon’s antipodal nature. At one time, theory was that Earth protected the earth facing side of the Moon from impact. That theory held until statistical analysis showed the tiny diameter of Earth, in relation to the orbiting Moon, could not have blocked more than 1 percent of incoming asteroids… hardly enough to notice, let alone explain the difference in crater density.

Current theory maintains the moon was created when a Mars-sized body collided with the Earth, dislodging debris that coalesced into the Moon in Earth’s orbit over 4.5 billion years ago. A period of heavy bombardment then left the majority of impact craters and a molten interior about 3.9 billion years ago.

Volcanism subsequently filled the impact basins on the near-side with lava, through cracks in the thinner crust, to solidify into the maria around 3.2 billion years ago. The far-side, having a thicker crust, experienced far less lava flow, therefore, preserving it’s craters.

Another popular theory proposes that, because Earth was a molten mass of rock at the time of the early bombardment, its infrared glow and tidal forces heated the near-side of the Moon sufficiently to delay it’s freezing into solid rock. The far-side cooled much faster and preserved the craters left by the early bombardment.

Each of these theories attempts to explain the difference in crater density using gravity, but fails to address why the far-side crust is thicker in the first place. A gravity model would predict the center of the moon’s mass should face Earth. Some have speculated the moon got turned around between bombardment and the end of lunar volcanism, but no mechanism has been accepted that would cause that to occur.

The EU community also has theories to explain the Moon’s dichotomies.

The approach it uses starts by asking more questions to get perspective on the problem – some of these questions seem to be ignored in the mainstream community.

Not only are the poles more heavily cratered, some see a hint of swirling pattern at the north pole. 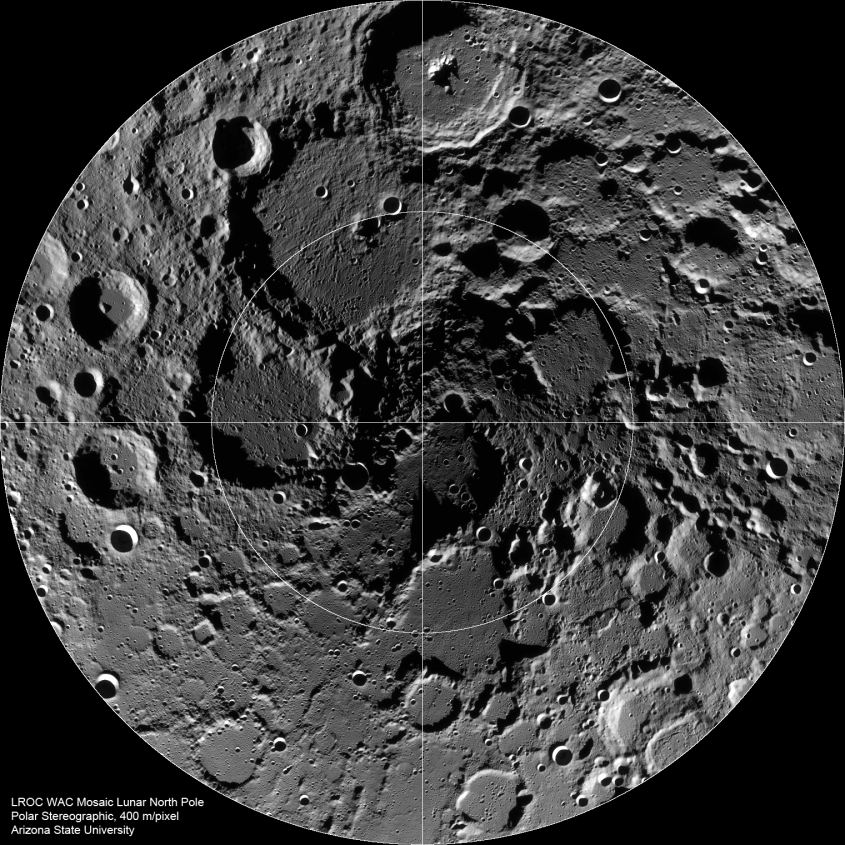 There is little to acknowledge these anomalies even exist in standard theories, let alone explain them. The practice is to work ad hoc theories for one thing at a time, and apparently they haven’t gotten around to these, being still stuck on the first problems.

Another way to progress, is to look at a more holistic picture. For instance, how do other planets and moons look. Mars, for example, also has spiral features at the poles, as highlighted by the polar ice caps on the north pole (right) and the south (left). Although the swirl is evident in the ice, it is a feature deeply sculpted in the underlying rock. 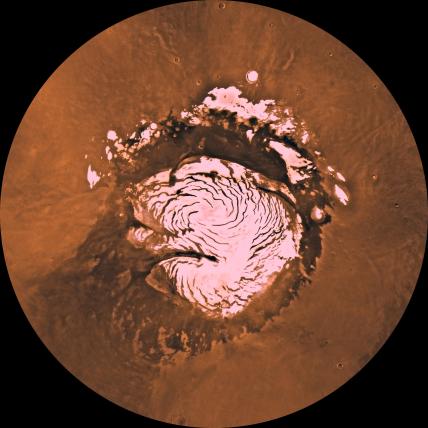 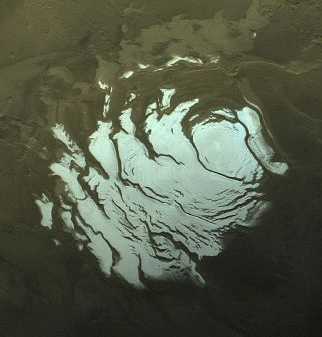 A look at Mars’ crustal thickness and crater density also shows similarities. Crater density is antipodal, too, as seen alternating from smooth to cratered hemispheres in these four views of Mars. 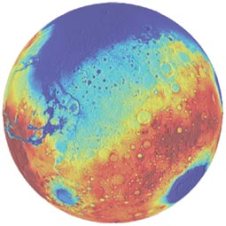 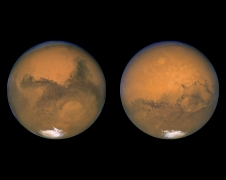 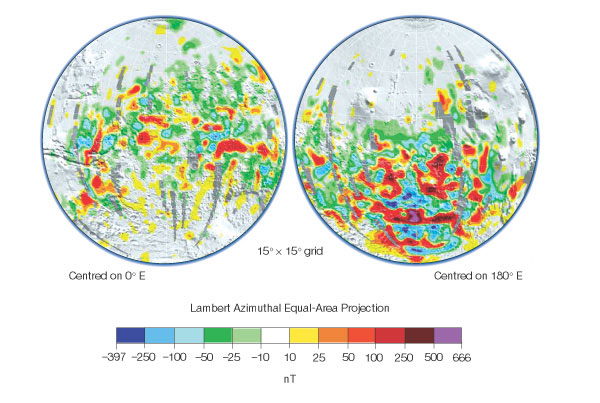 It’s also apparent the remanent magnetism matches the dark, swirling deposits in the southern hemisphere, similar to how the moon’s magnetism matches it’s surface features. Like the Moon, the antipodal features of Mars are in direct opposition.

Although there is less data to go on, other planets and moons show similar traits. The following slides show Mercury, Callisto, Enceladus, Tritan and Pluto, all of which have one side smooth and one side with heavily cratered highlands.

The demarcation is often stark, as exemplified in the photo below of a crater trail crossing boundaries on Ganymede.

A scientific approach should attempt to address these similarities in a holistic fashion, looking for commonality of cause and effect.

Planetary scientists apparently don’t do this. The standard methodology is to explain any anomaly by conjuring a large body of mass to put some catalytic gravity into the explanation.

The antipodal crustal thickness on Mars is, according to current standard theory, the result of an oblique impact that blasted away crust from the northern hemisphere early in Mars’ history. Because the impact struck Mars a glancing blow, the whole crust didn’t melt leaving the northern crust thinner than the southern crust.

But the impact theories still leave geophysicists with the problem of explaining why both the Moon and Mars are magnetized on only one hemisphere. According to the most recent theory, the remanent magnetism is the result of past dynamo current from molten interiors. Neither the Moon, or Mars have an active core dynamo today.

On the moon, the dynamo theory is based on a circulating molten core after the Moon’s formation. It left a magnetic imprint that was subsequently wiped away on one hemisphere, when it re-melted after the heavy bombardment.

Unfortunately, the age of the magnetized rock implies that the lunar dynamo had to still be going some 3.7 billion years ago, about 800 million years after the moon’s formation. That is longer than expected  for natural circulation to cool the molten interior. The moon’s small core should have cooled off within a few hundred million years. So now, more gravitational forces are being looked for to have kept the dynamo going.

In the case of Mars, it’s never been understood why Mars’ northern hemisphere has virtually no magnetic field. Evidence suggests that the effect is an ancient feature that should have formed before the dynamo shut down, and well after the assumed impact event, so it should be magnetized.

Several ad hoc theories have been considered. Maybe the north lost its magnetism in the presence of water, or maybe there were  impacts after the dynamo shut down that wiped out the north’s magnetism. Most recently, a theory proposes that impacts created differential temperatures, allowing a single-hemisphere dynamo to form that magnetized only the southern half of the planet.

Electric Universe submits that the evidence shows all of these planets and moons experienced severe electrical discharges from close contact with neighboring moons and planets during their creation, or when the solar system’s orbital dynamics were different.

The polar regions experienced cyclonic current events, similar to the polar aurora we have on Earth – but many orders of magnitude more energetic – from a disimilarly charged body in proximity.

The cratering and swirls are the result of electrical discharge and cathodic erosion at one pole, etching away the surface. The opposite pole experienced electrical discharge with anodic accumulation of material, forming a dome, drawing in matter from the nearby planet, as well as sweeping-in dust from the eroding pole.

As the current between bodies built at the poles, it coursed across the surface and through the interior, seeking conductive channels to short-circuit. Ionized dust created a thick plasma atmosphere, and flash-overs occurred, coursing across the mid-latitudes, scarring the face of the planet.

We see the same effect today on a far more subtle scale here on Earth – the polar aurora is where solar current streams in, and the continuous belt of thunderstorms across the equatorial latitudes are where charge differentials build and discharge in violent lightning. Our climate, seismic and volcanic effects wax and wane with the solar current.

Natural electromagnetic forces in arcing current sheets differentiate charge potentials, eroding one hemisphere cathodically, while anodically depositing magnetized material on the other. It sorts material and preferentially deposits it in the kind of bewildering array that is actually seen correlating to these features.

These energetic currents built mountains, raised volcanic blisters and tornadic electrical winds; melted bedrock and left craters, lava flows, rilles and canyons – the scars of tremendous thunderbolts. Dust and debris that blanketed one hemisphere trapped gases that burst through the layers of dust, adding simple craters and cones to an already bewildering array of lightning scars and impacts from falling debris.

These processes continue even today. Mercury, Mars, the Moon, comets and even distant asteroids like Ceres exhibit ongoing electrical etching, spurts of glowing discharge and tails of ionic material in response to the solar current.

The evidence is not only in these macro features, but at every level of detail we can look. Here are several examples of anomalous planetary features that EU theory can explain, without tripping into contradictions, or stretching the probabilities, the physics, or the imagination.

EU theorists have much work remaining to understand the physics of solar system formation, its temporal context and the orbital dynamics that caused events resulting in the types of morphology we see. It is understanding cause and effect that comes first. Building models and equations to better define first causes is the devil in the detail we still seek.

Because EU theory is a holistic approach, there is more evidence to rely on. Events of electrical planetary exchange is recorded in the history of mankind. Witnessed events of Mars and Venus in an electromagnetic embrace, and the consequences here on Earth, are recorded in the mythology that is collectively referred to as Thunderbolts of the Gods. Dave Talbott explains this aspect of EU theory in the series, Discourses on an Alien Sky.

Antipodal is a consistent theme in planet morphology for all of the rocky planets and moons. It’s because of the inherent dipolar nature of electromagnetism, from the subatomic scale to the cosmic, that it produces forces so immense. It creates not only planets and moons, but stars, galaxies and the entire Electric Universe.

For more reading on planetary features and EU theory on their formation, follow these links to related Thunderblogs and Presentations:

Astronomers Have No Idea How Planets Form

Did Van Gogh Paint This? by Andrew Hall

Hexagonal Craters on Mercury and

The Craters are Electric by Micheal Goodspeed

Symbols of an Alien Sky – the Lightning Scarred Planet, Mars

2 thoughts on “The Antipodal Moon”