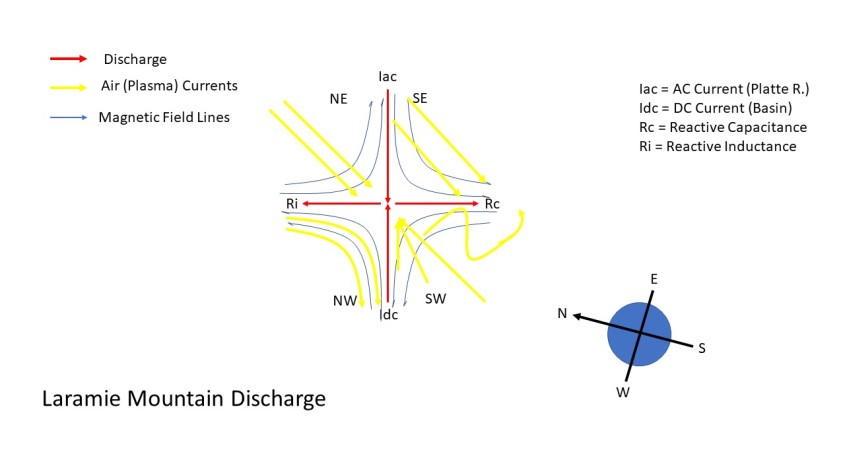 In my last presentation, Easter egg hunt in the Laramie Mountains, we covered the near perfect cross of canyons made by two out-of-phase circuits coming together. In Part 2, we’ll look at the wind cut valleys around the cross that resulted from induced winds.

Many readers will recall Michael Steinbacher. He theorized landscapes formed by electric winds that prevented deposition of dust raining from the sky. He even performed experiments that demonstrated electric winds doing it. What I’m showing you is exactly what he was talking about.

Wind cut channels are sometimes narrow, straight and deep like the capacitive winds in figure 11, and sometimes they snake, divide and join following induction currents, cutting broad valleys with funnel shaped inflows, as shown in Figures 12 through 14. The (a) image is annotated with wind patterns and the (b) image is without markings for comparison.

In the NW quadrant, winds followed magnetic field lines, making a sharp bend at the crux of the “X” and staying inside the quadrant, but lifting as they made the turn.

The SW quadrant has a split personality. In one half winds flow straight at the crux of the “X” in direct opposition to wind from the NE quadrant. These winds met in a central updraft that lifted them vertical. In the other half of the quadrant, winds circulate, making an “S” shaped pattern that begins parallel to, and then crosses magnetic field lines perpendicularly.

The Laramie circuit produced induction currents following both electric and magnetic fields. Winds in the NE quadrant were due to capacitive reactance, following the electric field. The NW quadrant winds were due to inductive reactance, aligned with magnetic field lines. The SW and SE quadrant winds were combinations of capacitive and inductive currents, but expressed in different geometries.

Reactive currents express either inductive, or capacitive behavior, or a mix in different parts of the circuit. Therefore it’s not surprising the southern quadrants have blended currents. What is surprising is how clear the pattern is etched, in spite of all the chaos and violence of this event. On display are electromagnetic forces that stirred the earth, like we would stir iron filings with a magnet.

Further away from the discharge, the southern quadrants mixed into a large tornado with two satellite whirlwinds that lifted wind in this quadrant into the mesocyclone storm (Figure 15). This tornado region sits just south of the “X” which marks the center of the mesocyclone’s central updraft. This position corresponds well with the formation of “wall clouds” that spawn tornadoes in typical thunderstorms.

Where wind exceeds supersonic speed and is forced to change direction, shock waves form. They are like folds in the fabric of the wind, which is stiffened into laminar jet streams segregated by extreme pressure differentials.

Tornadoes draw ground winds from all directions, but in a supersonic tornado, there is an inlet zone where the majority of wind enters the rotation. They are drawn from ambient jet stream winds that the tornado forms tangent to. Figure 16 shows winds entering the whirlwind change direction from linear to rotation, forming a large shock wave tangent to the rotation, and parallel to the jet stream (note 1). This inflow shock wave is a distinct feature of tornado “footprints” if the winds involved were supersonic.

If the winds also rotated at supersonic speed, additional shock waves form tangent to the rotation at points of shear between the rotating winds and ambient winds (note 2).

Finally, tornadoes may form shock waves due to shearing interior to the rotation where they curl inside the inlet zone (note 3).

The largest tornado in Figure 15 lies in the SE quadrant and produced Laramie Peak. It’s the highest point in the range at 10,260 ft, and sits next to a gouged-out valley that dips to 6,700 ft elevation. Both the valley and the peak are within the tornado’s rotation. Tornadoes form a cambered debris “bowl” where the winds scrape the ground. The debris is lifted away where the force of inlet winds carve at the land, and then are deposited on the opposite side of the rotation as the winds lift (Figure 17). Mt. Laramie is one such deposit.

Shock waves are evident where supersonic winds change direction. Examples in Figure 18a are tetrahedrons formed in the NE quadrant, where winds following the electric field lifted to create separation bubbles. They form tetrahedrons in linear rows conventionally known as monoclines, but they are, in fact, supersonic “sand dunes”. This is especially evident if you examine the breaks and inflections caused by constructive and destructive interference patterns.

Figure 18a shows tetrahedrons formed by jet stream winds rising to the mesocyclone in Area 1. A new set of tetrahedral dunes formed in Area 2, which deflected winds and starved Area 3, leaving a triangular interference zone that pinched out formation of tetrahedrons from the shock wave of Area 1. The gap between Areas 1 and 2 turned the wind and formed a tornado (Area 4) in it’s eddy.

Figure 18b shows these same features from another angle and how eddy currents form behind tetrahedrons in a low pressure zone beneath the rising winds. These are, in effect, destructive interference troughs behind the constructive peak of the wave pattern as winds undulated across the ground.

Stepping back to look at the entire heart-shaped circuit domain in Figure 19; blue lines trace the ground level jet stream winds, violet swirls indicate where tornadoes made definitive features on the ground, red “x”s are discharge patterns, and the green areas are where the thunderstorms down-drafted to the rear and rear flank of the storm (also Figure 20). The two lakes are where the circuits connected to ground deep in the Earth, leaving a distinct “V” shaped land form between them forming the base of the “heart”.

This would have been a horrible place. The discharges blasted negative ions and free electrons away in arc blasts, while drawing positive ions inward. The velocities, temperatures and densities of the winds differed, their dielectric properties differed, their charge densities differed; and they segregated, with the positive inflow hugging the ground, accumulating dust that adhered to the statically charged land. The drag of the winds covered the land with blankets of dust, layered like fish scales, hardened by sonic pressure and electric currents that snapped and crackled everywhere.

The clouds roiled in whirling updrafts overhead. A squall-line of heavy thunderstorms formed in mirror image to the chaos on the ground, spitting lightning in carpet bomb fashion that would have made the clouds glow. Rain fell in torrents of mud and rock. Supersonic winds scoured the ground, in-flowing to biblical whirlwinds, and sonic shock waves reverberated in electrified sheets of plasma current; the entire atmosphere surrounding the storm patterned in the shock-diamond herringbone of flashing, ionized shock waves.

Lightning discharge blossomed like acne, leaving pinnacles, dikes, craters and domes in regions of high tension. Winds stirred around these discharges, disturbing the ambient winds into transient cyclones that left hardened dunes as monuments. And the winds reached supersonic speeds patterned by shock waves that embossed the land with triangular and polygonal wave-forms.

At the time they were made, with all the violent turbulence, heat and electric currents, the mountains likely resembled not so much hard granite, but puddles of hot jam, squished into form by wind and mashed by an electric fork.

This whole mountain range is direct and unequivocal evidence of electric formation. Conventional means of uplift, faulting and erosion requiring several eons of disconnected events could not, by any reasonably statistical probability produce phase diagrams 15 miles across the face of the earth with induced current paths shaped by magnetic field lines.

The features of these mountains are coherent only when recognized as the result of electrical circuits in the Earth. Each ridge line and canyon, every hill and dale, can be tied to a sequence of events that occurred at one particular phase in Earth’s evolution involving extreme electrical stress on the planet.

Conventional science can’t explain why any two of these features coexist, let alone demonstrate their disjointed theories empirically, or model them with any real plausibility on computers. But you can make discharge patterns like this with some wire and an AC power source. Or, as I have done, bring two out-of-phase plasma balls into contact.

I simply powered one plasma ball with AC current and one with DC, so it produced and in-phase/out-of-phase sequence as the AC side alternated. Between the two balls, the sparks joined and spread with each pulse, like hands clasping, then spreading fingers to push away as energy expended in reactive discharges, perpendicular to the in-phase current flow, just like the “X” patterns in the mountains.

The plasma interaction between the plasma balls didn’t occur at the glass barrier of the globes, as you might expect. It occurred inside the DC ball with the weaker voltage, pushed there by the higher voltage AC ball. Unfortunately, the experiment fried my plasma balls before I could film it. I don’t have the kind of high speed equipment needed to properly photograph it anyway. This image in Figure 21 however, does capture the effect, although I don’t know the circuitry of this set-up.

Figure 21 shows a Tesla coil discharging to an electrode. White filaments of current direct connect to the electrode, while violet plasma flames of reactive power shoot outward in a cone around the discharge. The angle of the cone isn’t 90 degrees, but that is an artifact of this particular circuit and its phase angle.

So, you see the world is a more understandable place than you have been led to believe. To understand it we need to recognize the Earth contains holographic imagery of it’s past charge distributions. We need to recognize that charge distributions result from circuitry that can be traced, understood and put to experiment and modelling. The information is there to learn vastly more than we know today about its creation. To get the info, we just need to ask the right questions.

Join 585 other followers
Follow The Daily Plasma on WordPress.com