The result of a gamma ray burst detection survey is shown in the featured image from JPL. Each blue dot represents a gamma ray burst (GRB) detected by the team as observed relative to the Milky Way. The discovery team of Hungarian and U.S. astronomers are calling the structure a “ring.”

Statistical analysis indicates a one in 20,000 probability this complex formation isn’t chance. The findings were published on July 27 in the Monthly Notices of the Royal Astronomical Society.

Team leader, Lajos Balazs of Konkoly Observatory in Budapest, told Phys.org, “Until now, GRBs are the only objects for which we know the spatial distribution in the whole observable universe. All other objects are complete only in a restricted part of the sky. Our discovery has revealed a large-scale regular feature not known before. Large scale objects like GRB groups have been known already, but such a regular circular structure was a surprise.”

The findings claim a ring, but the astronomers told Phys.org they believe the shape to be a visual impression, and may actually be a spheroid seen head-on. They speculate it may be caused by a spatial harmonic of large-scale matter density distribution.

GRB’s are the brightest events seen in the Universe, thought to result from hyper-nova of massive stars collapsing into back holes, or two neutron stars coalescing. They are extremely rare, transient phenomena. Neutron stars coalescing are a class of GRB that last less than two seconds. Long GRB’s, considered stellar hyper-nova, last from seconds to hours. The article did not state whether these were long, or short GRB’s.

Either way, it makes the pattern all the more remarkable – they caught nine in a structure blinking, which suggests not only spatial, but temporal relationship. The article did not give the time frame, or duration of the GRB’s detected, but said the astronomers seek to collect more GRB’s to study the temporal framework of such events.

They seek to explain a gravity induced “harmonic” that causes massive stars separated by billions of light-years to go hyper-nova, like bullets in a revolver. Good luck.

This can’t be explained by standard theory. It violates the basic mainstream assumptions for CP and the Big Bang.

The Cosmological Principle (CP) sets a theoretical upper limit to large-scale structure of 1.2 billion light years. According to Big Bang theory, the universe is homogeneous and isotropic, so matter should evenly distribute in all directions.

Large-scale structure is detected in the cosmic filaments that string galaxies together, but such structures are under 150 Mpc. This is five times as large according to the astronomer’s findings. If confirmed, the researchers themselves say, their findings refute CP theory.

The scale they estimate is based on gravity model assumptions about red shift. The findings suggest a) theory of red-shift is wrong, and therefore estimates of size and distance are wrong, b) the theory of CP is wrong, c) the theory of GRB’s is wrong, or d) all of the above.

Electric Universe picks, d) all of the above.

Red shift – The researchers’ estimate of scale is dependent of the notion of cosmological red shift caused by an expanding Universe. Halton Arp, the most respected and prolific astronomer of his day, proposed a mechanism for intrinsic red shift based on observations of quasars imbedded in galaxies – a mechanism not related to distance. He describes his theory, and its vehement dismissal by mainstream science in his book, “Seeing Red.” For more information, see Halton Arp present his findings on unusual galaxies.

Mainstream science refused to acknowledge his observations, instead convincing themselves the presence of high red-shift quasars in low red-shift galaxies to be a visual illusion caused by gravitational lensing. With astonishing dishonesty, they claimed to be unable to reproduce observation of filamentary connections between galaxies and quasars found by Arp, even though amateur astronomers with home-based telescopes have done so quite easily.

GRB – EU suggests GRB’s are the result of double layer explosions in plasma filaments. Double layers were described in 1929 by plasma pioneer and Nobel laureate Irving Langmuir. They form when electric charge flows through plasma. They are the cell-like walls of a plasma conduit, formed by counter-rotating, wrapped magnetic fields that give structure to the Berkeland current, capable of carrying and accelerating charge across vast distance in space.

EU concept of GRB’s is described more fully in these articles by Stephen Smith. Instability in the double wall will cause a discharge – a cosmic scale lightning arc. Lightning produces gamma rays, as detected in terrestrial lightning. You can read more on terrestrial gamma ray flashes at NASA.

That gamma rays are commonly produced by known electrical phenomena is significant to understanding how well EU predicts such events with known physics, and how far Big Bang theory must reach beyond known physics to invent theoretical, but unobserved phenomena such as hyper-nova, black holes, dark energy, dark matter and neutron stars to explain the observable universe.

Nevertheless, it also predicts large-scale structure, as seen in cosmic filaments and the collimated “jets” of active galaxies that extend thousands of light years. Even if the spiral feature is much closer, it still covers 43 degrees of sky, suggesting it is enormous even if it is very close.

At whatever size and distance, plasma phenomena are scalable to accommodate. For a comprehensive description of large-scale phenomena and Birkeland currents, see Donald Scott present “Modeling Birkeland Currents, Parts 1 and 2,” in his 2015 EU Workshop.

My observation – The spiral appears very much like observations made by Halton Arp, who theorized quasars are birthed from active galactic nuclei through spiral arms. 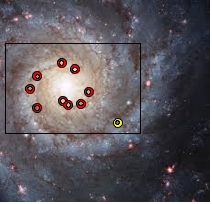 The Whirlpool galaxy exhibits spiral structure in this NASA Hubble photo, to which I overlaid a trace of the GRB pattern to compare geometry. A tenth outlier GRB from the survey (yellow) is included that appears to belong to the spiral suggested.

Perhaps we are looking down the throat of a cosmic scale z-pinch, producing a new family of galaxies.

Perhaps it is evidence of the current that gave life to our own family of galaxies long ago – it seems pointed in the right direction.

Or perhaps, these are instabilities in the double wall of the heliosphere, where galactic current feeds our Sun.

The findings should stimulate lively discussion in the EU Community. This is certainly evidence in its favor. Please make your thoughts known by giving feedback to Thunderbolts.info.